I am spending way too much time online.  Whenever I am in Florida, I spend most of my day Skyping and writing.  Unfortunately, by being online so much, I am exposed to some of the most inane crap imaginable.  From Facebook to emails, I am inundated with pictures, comments, and opinions that range from foolish to worthless to dangerous.  One such Facebook posting came my way this morning, and it got me off track, so I just had to respond.

After this, I promise I’ll take a break from posting.  The sun is shining, and all those little Hispanics out there have our golf course in perfect condition.  I don’t have a clue as to what they are saying, but they sure can cut grass.  Maybe I’ll get a round in. 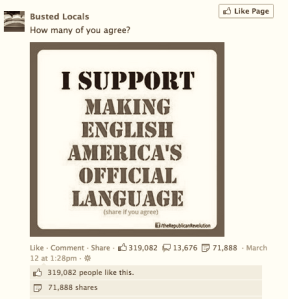 How about everyone just take a deep breath here before you get out of control with your bigotry.  Assimilation always takes a generation or two.  It’s just the way it is.  My grandparents were born in Sicily, and although my grandmother came to America when she was only three years old, you would have never mistaken her for your version of an “American.”

As a merchant, I stay out of politics, but lately I have been inundated by quite a bit of mean-spirited “patriotism.”  While there is certainly no denying that the great Aryan migration from Eurasia through Europe to the British Isles to America has left an indelible mark on our heritage and culture, you shouldn’t forget that the indigenous language and culture of America was that of the Native American Indian.  In fact, thousands of languages were spoken in North and South America prior to the first contact with Europeans.

I guess it must really be surprising to some of the most racist people in America that the Aryan history starts with the ancient Indo-Iranians, who inhabited parts of what are now Iran, Afghanistan, and India.  Ouch.  It must really hurt when they hit a Seven Eleven.

What troubles me is this bigoted argument about who America really belongs to.  According to a prevailing New World migration model, migrations of humans from Eurasia to the Americas took place via Beringia, a land bridge which connected the two continents across what is now the Bering Strait.  The most recent migration took place around 12,000 years ago.  That makes the post Christopher Columbus era look quaint.

If you talk to the Irish who were brutalized during the late 19th century, they would certainly tell you that it wasn’t their America [until they eventually took over the port cities of the Northeast].  As for the Southern Italians and Sicilians, they were second most lynched group in the South.  I won’t even touch the black equation.

To carve out a rail bed from ridges that jutted up 2,000 over the valley below, Chinese immigrants were lowered in baskets to hammer at solid shale and granite and insert dynamite.  During the winter of 1865-1866, when the railroad carved passages through the summit of the Sierra Nevadas, 3,000 Chinese workers lived and worked in tunnels dug beneath 40-foot snowdrifts.  Accidents, avalanches, and explosions left an estimated 1,200 Chinese immigrant workers dead.

Despite their heroic labors, California’s Chinese immigrants became the objects of discriminatory laws and racial violence.  California barred these immigrants from appearing as witnesses in court, prohibited them from voting or becoming naturalized citizens, and placed their children in segregated school.  The state imposed special taxes on “foreign” miners and Chinese fishermen.

And the list of “patriotic” atrocities goes on and on.

Nevertheless, the fact that America eventually does assimilate its masses is truly remarkable.  Not since Suleiman the Magnificent’s Ottoman Empire has there been a more magnanimous nation for immigrants and minorities.  Our American legacy finds its brightest moment in the poem of Emma Lazarus [an American-Sephardic Jew] which appears on a bronze plaque in the pedestal of the Statue of Liberty:

“… Give me your tired, your poor.  Your huddled masses yearning to breathe free.  The wretched refuse of your teeming shore.  Send these, the homeless, tempest-tost to me.  I lift my lamp beside the golden door!”

The American Dream makes me proud to be an American.  It is the greatest country in the history of man.  It is a unique experiment in populist democracy, and it has certainly worked out for my family, friends, and me.  But it is a dream that needs to be shared or it will lose its will to live.

When I was a teenager, I remember sitting in an old girlfriend’s living room with her whiter than white WASP mother.  She asked me if I was Italian, and I said, “No, I am Sicilian.”  And she said, “Aren’t Sicilian’s just niggers come north?”  But before I get too upset with her, I will return to my dear old grandmother [who was arguably the nastiest woman who ever lived].  Whenever she would see a black person, she would say, “They should make every nigger swim back to Africa with a Jew under each arm.”  Nice.

Bigotry has a long history, and I was raised with it on the West Side.  Fr. John Sturm [who was a tough little German from the East Side of Buffalo] said that the toughest games at Canisius High School were when they would have the Germans vs the Irish vs the Italians vs the Polish intramurals.  Like Fr. John, I still get annoyed by every ethnic and racial group, but that doesn’t make me a racist, it makes me human.  So, before we start claiming this is your America, you better do a little digging to see just how valid your claim is.  What you find might surprise you.  I know when I did a little digging, I found out that America truly was mine – mine to build, mine to protect, mine to enjoy, and mine to share.