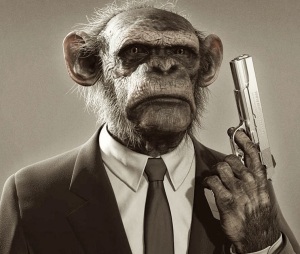 The essential difference between man and beast [aside from our unique advantage of opposing thumbs] is that man’s desire to build more out of what exists is in sharp contrast to an animal’s vital pursuit of its competitive advantage in the food chain.

Our inherent desire to build more out of what exists is buoyed by our thoughtful curiosity and occasional reason.  It is further advanced by our competitive nature and social agenda.  This, however, is a shared experience – to varying degrees – with the rest of the animal kingdom [of which we are the presumptive king].

Nevertheless, our desire to build more out of what exists is what ultimately defines and rewards us.  While you could argue that [today] it is the notoriety of our personal brand in our vapid celebratory culture that rewards and defines us, I would still default to my more substantive assumption.  Of course, if I’m wrong, I’ve clearly wasted 60 years.

As with any assertion, the opposite holds forth as a troublesome counter-point.  It allows for our innate desire to destroy as well as build.  This desire to build more, by its very nature, spawns the desire to destroy more.  The old yin and yang.*  For my edification, I have simply recognized people as occupied by one or the other.  For the most part, it has held true. 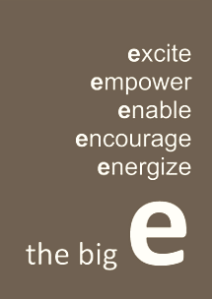 But that’s not what this post was going to be about.  What I wanted to talk about was the key elements to making something more out of what exists.  To be sure, the are many aspects, criteria, and resources that are involved in any successful activity.  But what propels all of this activity to success?  What engages us?

To build more out of what exists, any endeavor requires the recognition and embodiment of 5 indispensable elements of engagement: excite, empower, enable, encourage, and energize.

The genesis of this theory of activity is eclipsed by the anecdotal evidence that has manifested itself over 35 years of the success and failure of numerous personal enterprises from raising a family to building a business.  The elements that I recognize and espouse are entirely based on my experiences, and I’m convinced that if any of these elements are eliminated from the engagement – the prospects of success ebb.

While I could enliven this discourse with entertaining examples of effective execution of my theory, I would prefer to have you embark on your own exercise of exploration.  Entrusted with nothing more than your own criteria for success, evaluate some recent or past experiences, and see if they embody these 5 elements.

Very seldom do I get a written comment from the readers of my blog.  When I do receive the occasional thoughtful missive, I am more than delighted.  It’s the little things in life …

* yin-yang  In Chinese philosophy, the concept of yin-yang is used to describe how seemingly opposite or contrary forces are interconnected and interdependent in the natural world; and, how they give rise to each other as they interrelate to one another.  Many natural dualities [such as light and dark, high and low, hot and cold, fire and water, life and death, and so on] are thought of as physical manifestations of the yin-yang concept.

Yin and yang can be thought of as complementary [instead of opposing] forces interacting to form a dynamic system in which the whole is greater than the parts.  Everything has both yin and yang aspects, [for instance shadow cannot exist without light].  Either of the two major aspects may manifest more strongly in a particular object, depending on the criterion of the observation.