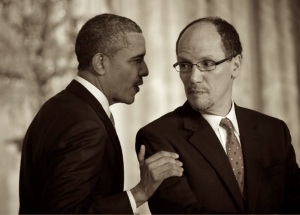 So, along with my best friend from high school, Joe Macmanus [who President Obama recently appointed as the new U.S. Ambassador to International Organizations in Vienna], we now have my old first baseman, Tom Perez, being appointed as Secretary of Labor.

I haven’t thought about Tom in a long time.  I lost touch with him years ago, but I’ll never forget his family and him.  I remember his dad passing away, and I was thrilled that Tom was still going to Canisius High School.  I think he may have been a college rep for us at Brown.  It’s fantastic that Tom is the Secretary of Labor, but Teeko’s [sp?] a doctor?  It would be great to hear from them.

It’s safe to say that Canisius High School is well represented at the Federal level.  Johnny Sturm would be proud.  I’m just happy to have our FedRAMP IaaS ATO.

Wikipedia:  Thomas Edward Perez was born and raised in Buffalo, New York, to parents Rafael and Grace (née Brache) Perez, who were both first generation Dominican immigrants.  His father Rafael, who earned U.S. citizenship after enlisting in the U.S. Army after World War II, worked as a doctor in Atlanta, Georgia before moving to Buffalo where he worked as a physician at a VA hospital.  His mother, who came to the United States in 1930 after her father Rafael Brache, was appointed as the Dominican Republic’s Ambassador to the United States, remained in the U.S. after Ambassador Brache was declared persona non grata by his own government, for speaking out against Dominican President Rafael Trujillo’s regime.

Perez, who was the youngest of four brother and sisters (who all followed their father in becoming doctors), suffered the loss of their father when he died of a heart attack, when Perez was 12 years old.  He graduated from Canisius High School in 1979, putting himself through college through the help of scholarships and pell grants.